Your browser is not supported. Please update it.
Home page
Call 0208 346 6023
Website by GolfWorking

In 1900 two gentlemen with the ‘golfing bug in their veins’, bank manager, Walter Mull and engineer Tommy Cutting approached local farmer, Mr Slade of Holders Hill House (now part of the Hasmonean School) on Holders Hill Road. They sought his agreement to rent his 38 acres of grassland on the east side of Holders Hill Road as a golf course. Agreement was reached on a rent of the “princely sum” of £10 per year which included a room as a dressing room. 9 small greens were laid out with oversized holes, maintained by the two golfers with Mr Slade’s livestock looking after the rest. Cream teas were available at the price of one shilling or 5p in today’s money. 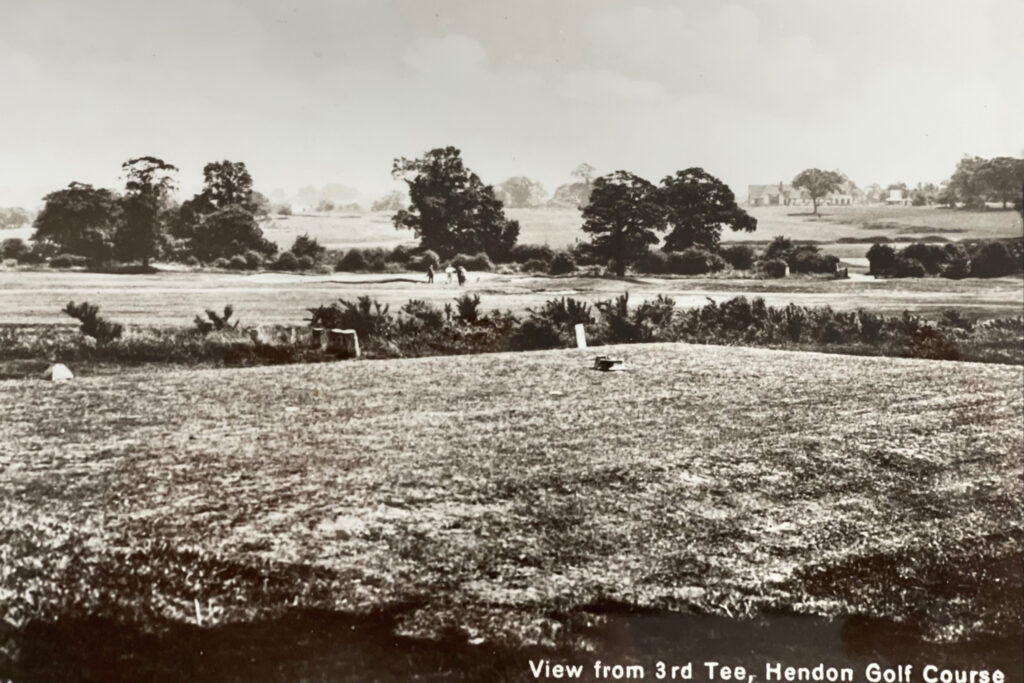 Local interest grew and several friends of the two got involved in the project. By early 1903 there were 8 regular golfers enjoying the facility. In addition to Messrs. Mull & Cutting, Dr Houlbrook and Messrs. Buchanan, Butler, Carter, Johnston, Kamester, Slade and Walduck. These gentlemen formed a club committee, chaired by Dr Houlbrook. The committee then reached agreement with Mr Slade to lease his farmland, area of about 45 acres on the west side of Holders Hill Road extending down to Ashley Lane for £55 per year. The extra land enabled the construction of a full-sized course. To make the project viable however a membership of at least 50 would be needed. The committee called a meeting of interested people at the District Council Offices on Monday 23rd February 1903 to complete the arrangements. The meeting resulted in the formation of Hendon Golf Club with all those attending becoming the first elected members. Dr Houlbrook was elected Captain, Mr Walduck, Treasurer and Mr Mull, Secretary. The annual subscription was set at 2 guineas for the first 50 Members with an entrance fee of 1 guinea for subsequent new members. The lease with Mr Slade was agreed and some additional land was acquired for the building of a clubhouse. 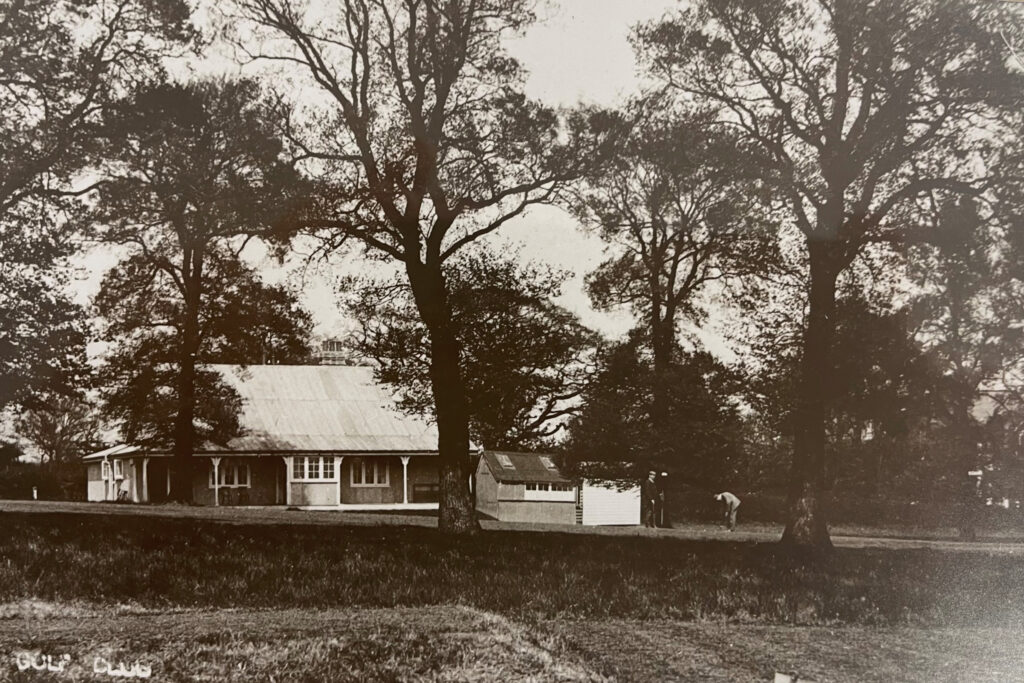 In 1903/04 J.H. Taylor, a five-time Open Winner was appointed to lay out the course. With Harry Vardon, a six-time winner of the Open also contributing to the design.

During 1905 and 1906 a clubhouse was built on the west side of Holders Hill Road. The work was financed through the purchase by members of Preference and Ordinary Shares in a private Limited Liability Company which had been formed (and subsequently went into liquidation)

In 1923 Hendon Golf Club were lessees of the land on both sides of Holders Hill Road with 6 holes of the course on the east side and 12 holes on the west. During this time, they were advised that a sizeable part of the 38 acres on the west side would probably be compulsory purchased for the construction of a new trunk road, the Great North Way, The A1. It therefore became imperative that if Hendon Golf Club were to survive, additional land had to be acquired. As the Club itself had no money, several members took the initiative and bought the 38 acres to the west. The members then received the compensation due from the compulsory purchase order and eventually sold what remained of the site, including the house, achieving a very tidy profit of about £9,000 which they passed to the club.

The members then negotiated the purchase of the leased land to the west on which 12 holes were located and about 65 acres of farmland beyond Ashley Walk at a cost of just over £39,000. Finance for this came from the bank upon the deposit of the deeds and the personal guarantees of nine members.

A Bond Scheme was established by a Trust Deed on 15th September 1925 from which it was hoped to raise £40,000. In the event £31,025 was raised. Under the terms of the Deed the bondholders would be absolute owners of the land and thus entitled to any profit on sale.

With the purchase of the land secured, eminent course designer Harry Shapland Colt and his partner J.F.S. Morrison were appointed in June 1925 to design the golf course. Franks & Harris were appointed as the contractors and William Press as contractor for the irrigation system. Work commenced in May 1926 and was completed in January 1927. Thirteen new holes were built, others remodelled and nearly 100 bunkers installed to form the course we know today.

The new course was officially opened on 10th April 1927, followed by an exhibition match on the 27th of April between Sandy Herd (Moor Park), Jack Smith (Wentworth), Charles Bradbeer (Hendon) and Ted Ray (Oxhey). In the same year, a new clubhouse was built providing modern facilities for members, guests, visiting golfers and the club staff. The new club facilities coupled with an excellent course made Hendon an extremely attractive proposition, increasing numbers of both members and visitors.

During WW2, the Club was requisitioned to help the war effort and 22 acres turned over to growing corn. 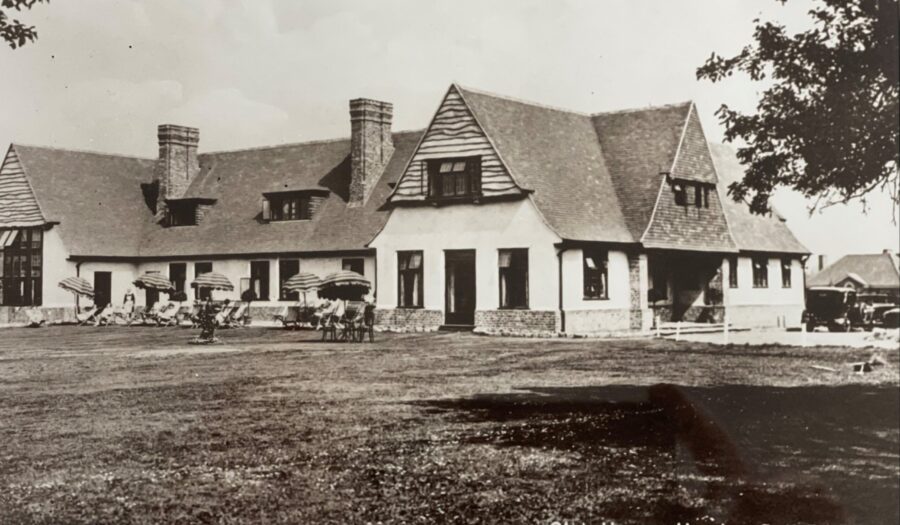 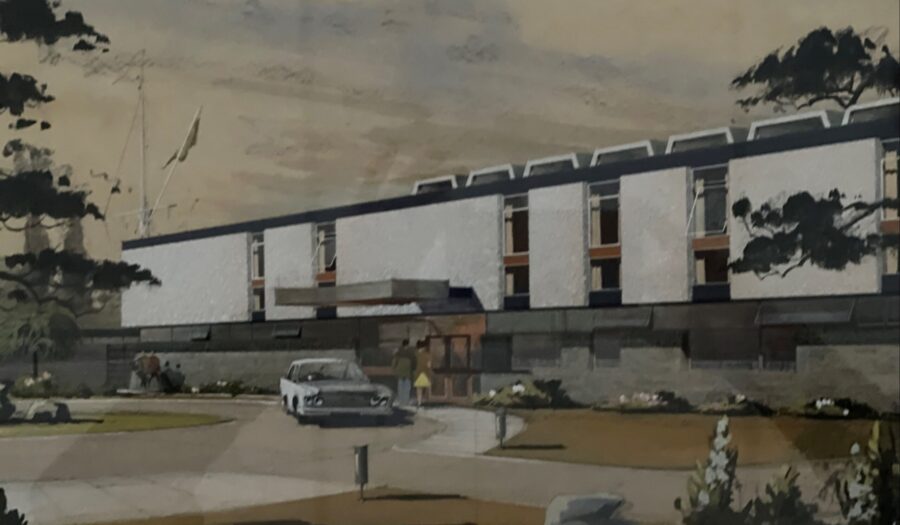 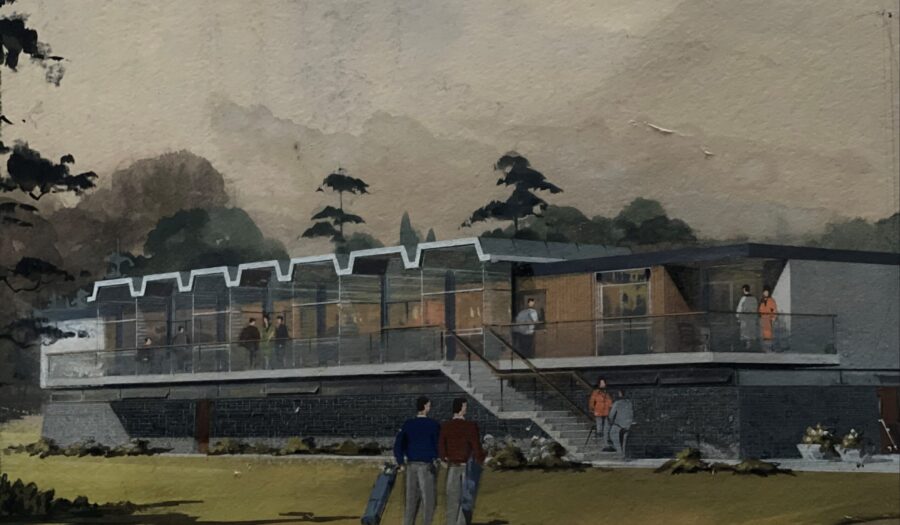 In 1951, Torquil Macleod, who had never previously served on the Committee, was elected as Captain. In those days the Captain also became the Chairman during his year in office. Torquil addressed the serious issue that the Club was facing an urgent ownership challenge as, under the terms of the Trust Deed, the land had to be sold in 1955 to repay the original bondholders, some of whom were still members, but estates of others wanted repayment. He then led, with others of course, complete refinancing negotiations which resulted in some members putting up Loan Notes, which were later repaid to them and the 1925 bondholders all repaid. During this rather lengthy process he agreed to serve for a second year in office which was unprecedented, except for early years and wartime years, to finalise the restructuring.

The outcome was that, for the first time, the members gained unencumbered freehold ownership of the land, plus the Committee would in future be elected from the total membership, rather than being controlled by Bondholders. To protect the land ownership, a Trustee body comprising up to five senior members, was set up to “own “on behalf of the complete membership, the freehold and other assets, and Torquil became the first Chairman of Trustees.

The exercise was targeted to cost £10,000 (in 1950’s money) but ended up overspending by £1,350, so for years our Balance Sheet showed a fixed asset of Freehold Land at £11,350. At the time Torquil acknowledged the “overspend” but said to the Committee that “in the long run members would no doubt agree that this was a good investment!” In those days, the Club had a very active Artisan section comprising many members whose income or work commitments did not permit full membership but enjoyed limited golf tee time access in exchange for helping on the course. Torquil was a very supportive Honorary President of the Artisan section, a golfing highlight of the year being an annual match between full members and the Artisans played at 5.30am on a summer Sunday, competed for his donated “Cockerel” Trophy presented to the winning team over a full English breakfast in the dining room. After his sudden death, the Artisans presented the “Torquil Macleod” Trophy. 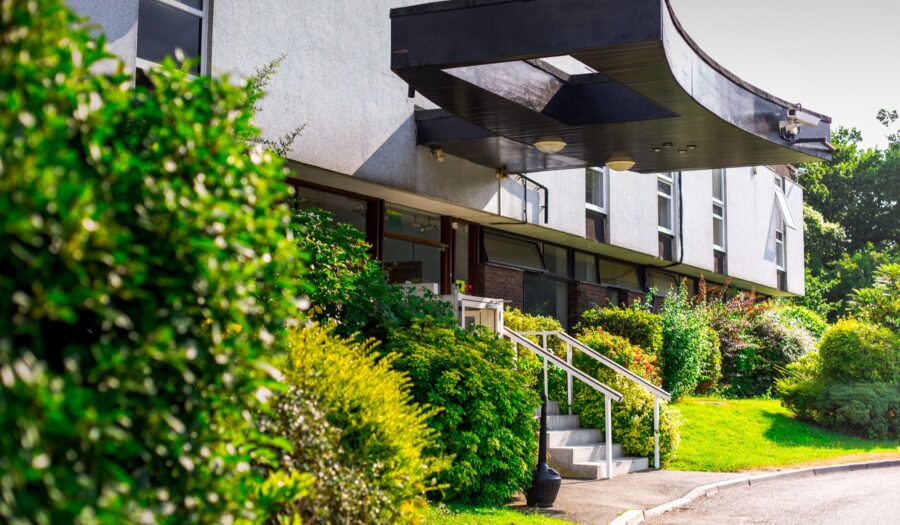 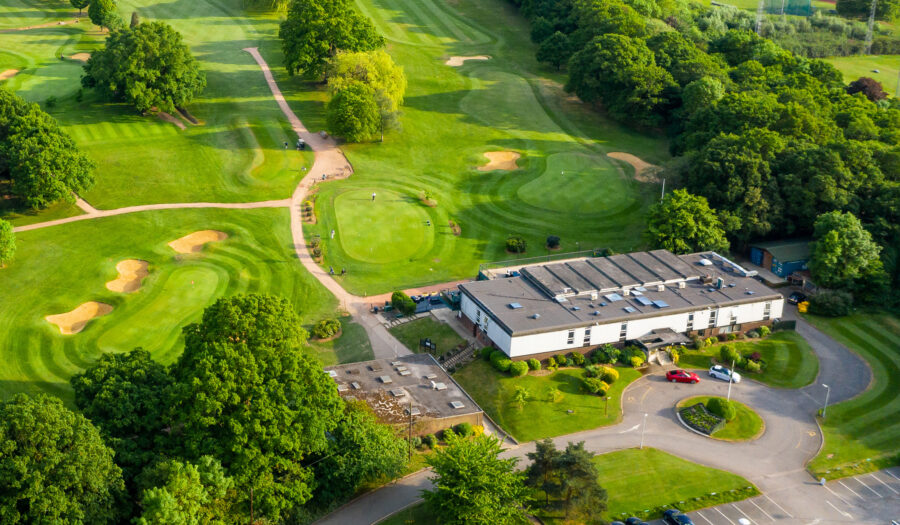 When the present clubhouse opened in 1964, the old clubhouse behind the 15th tee was demolished and the land on which it stood, sold. This provided the opportunity to change the layout of the golf course. The actual holes remained pretty much the same, however the hole numbers changed, resulting in the “two horseshoe” layout you see today. The front 9 holes run roughly anti-clockwise inside the back 9 holes which run clockwise with both the front and back 9 coming back to the clubhouse. 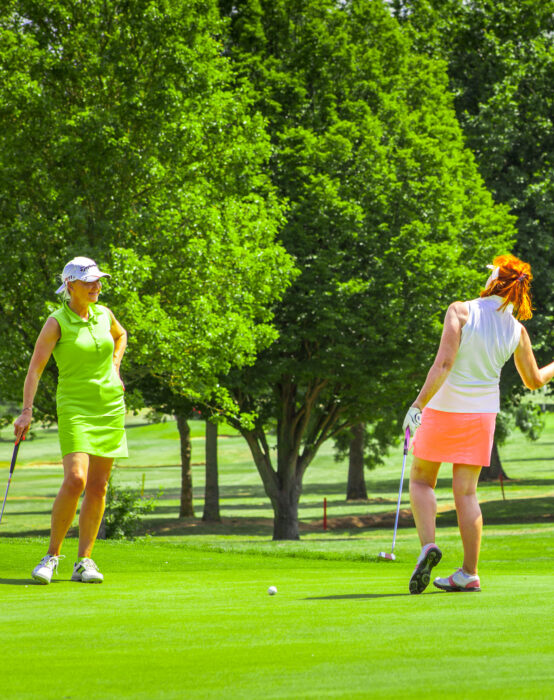 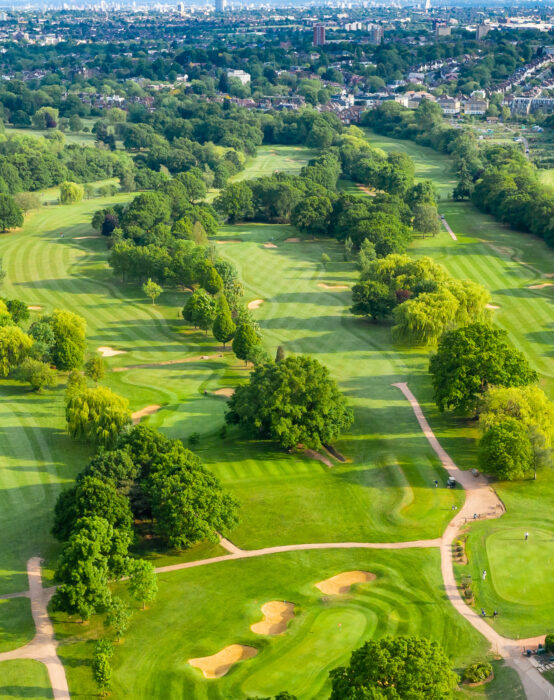 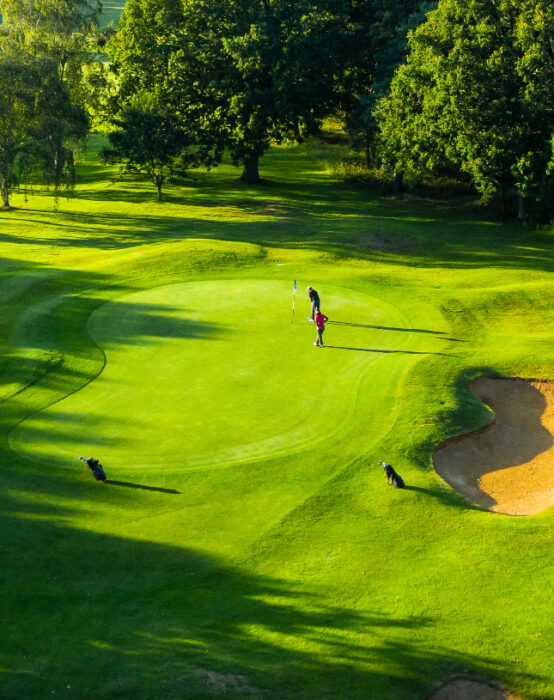